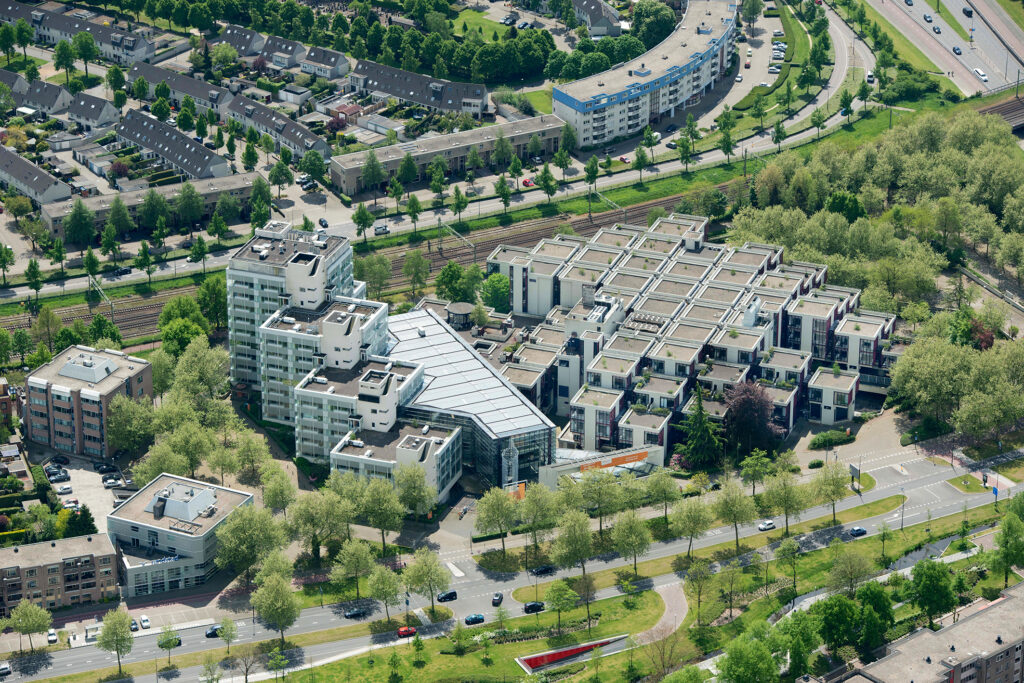 ‘S-HERTOGENBOSCH, 16 June 2022 | Certitudo Capital is beginning its transformation of the iconic Hertzberger Park in Apeldoorn. The monumental building will occupy a central position in a new mixed-use area that will be created. A development vision was submitted for this purpose to the municipality of Apeldoorn in November, which was recently approved.

Hertzberger Park revolves around the iconic 1972 design by architect Herman Hertzberger, known to Apeldoorn residents as the ‘Centraal Beheer building’ or ‘Monkey Rock’. It is for this location, near Apeldoorn train station, that Certitudo Capital, the municipality of Apeldoorn and architect Winy Maas of MVRDV are working on an area development plan.

MVRDV was commissioned by Certitudo Capital to develop a development vision for the area where the structural design of the Centraal Beheer building would be extended to the entire residential area. The axes of the central street will become an important meeting point for the people of Apeldoorn and will serve as the main routes through the area, providing a good connection to the city and the railway station.

Part of the development vision is the section designed by Hertzberger, the Pakhoed towers and the current car park. An integral approach has been chosen in order to create a new area for people to live and work. In this area development plan, the existing buildings will be revitalised and new buildings will be added. The plan consists mainly of housing with a number of neighbourhood support facilities and workplaces.

Transforming the existing buildings not only represents a gain for important Dutch architectural heritage, but also for the environment. The CO2 emissions from the construction of this residential area are significantly lower than for ordinary housing.

Arno van den Thillart, Director of Project Development at Certitudo Capital: “For us, the focus is on restoring a landmark on the one hand, and elevating the spatial quality on the other. The parties involved have been able to come together on this, which has accelerated the planning process. Now it’s time to get to work.”

Winy Maas, Architect from MVRDV: “It is an supremely cool project. Herman Hertzberger is an important role model for me. He was my professor when I studied at TU Delft. A great trio together with Aldo van Eyck and Rem Koolhaas. I worked with Herman twice on InDeSem, the International Design Seminar he organised. I think he and his social agenda are inspiring and I really identify with him. Just as Herman launched a completely new office landscape in the early 1970s, we also did the same with MVRDV in the early 1990s with our Villa VPRO. We took our client to the Centraal Beheer building, which was such an eye-opener that it was echoed in the design of the villa. The building also has an exceptionally beautiful structure. We will certainly retain this as the foundation for the transformation, which you can also see as an extension of Herman’s vision.”

Wim Willems, Alderman of the municipality of Apeldoorn: “Like many other cities, Apeldoorn is facing a number of major challenges. For example, the need for housing, commercial premises and clean mobility is growing, and we are struggling with the effects of climate change. These elements converge in Hertzberger Park. The park also forms a physical link to the city centre and the nearby nature. An architectural icon such as Hertzberger’s Rock offers a unique opportunity to demonstrate that this can be achieved without doing harm to our heritage. Ever since it was built, Hertzberger’s masterpiece has succeeded in inspiring both its users and its surroundings. We are confident that it will become an inspirational area, even if it takes on more functions than only a workplace.”

On 29 June, an informational evening will take place and interested parties can register via: https://www.hertzbergerpark.nl/participatie/.

What can we do for you?